Here's one for fans of the Doctor (who knew he would be appearing on my blog again so soon!) - finger puppets!  Easy to make with basic sewing skills, and the craft felt and thread are very inexpensive.  This tutorial is for the TARDIS, but if you have a look at the end, you will find another bunch I made too!


Here is the TARDIS pictured with a Cyberman and a Vashta Nerada (the three were my last order through my Etsy shop, which is now defunct) 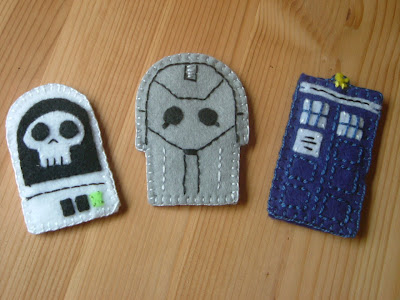 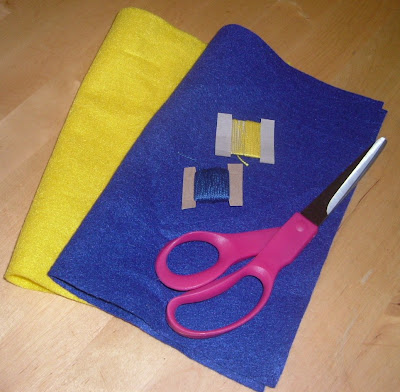 The first thing to do is make a paper template - draw a rectangle measuring 4cm x 7cm, and then add the little extra piece at the top where the TARDIS light goes!  Pin the paper to the blue felt, and cut out three of these.  At this point, I also used a scrap of white felt to cut three small squares and a narrow band to go across the top. 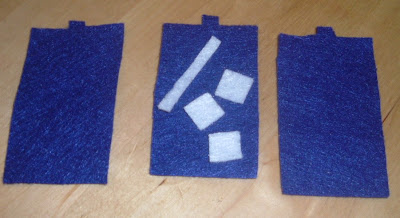 Pick out which of your three shapes will be your front, this is where you will be doing most of the work!
Using your black thread, attach the narrow band (this is where it says "Police Public Call Box" on the actual TARDIS, the black thread represents the words in this case.  Once done, leave the black thread unfinished at the back for a few moments.
Thread your white thread and attach the three white squares - each is held with a stitch in each corner.  Then, re-thread your black thread and put the "writing" on the lower of the white squares. 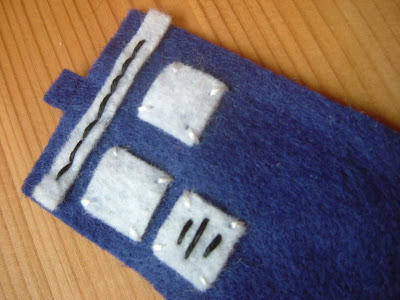 Thread your blue thread and make the "panels" on the windows - each window has one line horizontally and two vertically.  From there, sew a line starting underneath the white band, almost to the bottom, which will be where the TARDIS doors meet. 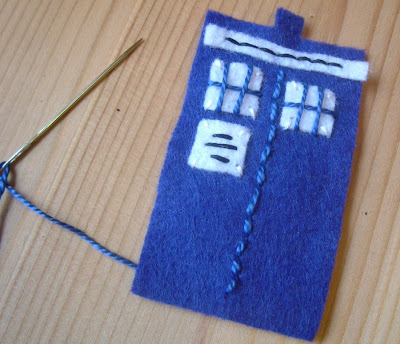 Go back and sew on the outlines of the remaining squares in the same blue thread. 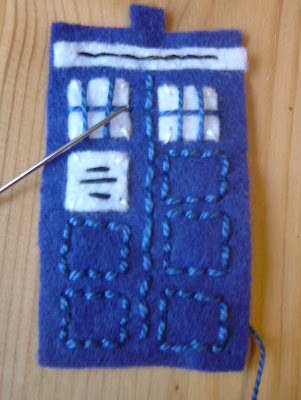 Take a tiny scrap of yellow felt and cut it to the same size as the little light piece at the top - put a couple of stitches in the bottom, the rest will be secured when you sew around to complete the puppet.
To finish it off, take the remaining two TARDIS shapes - and line them up all together with the front on top - pin them to keep them in place while you sew.

I used blanket stitch on my puppets as I like the way it looks.  Sewing through all three pieces, begin to blanket stitch around the shape - however, DON'T FORGET when you get to the bottom of the puppet (where your finger will go) to continue with the blanket stitch but ONLY through the front and middle pieces.  Pick up the back piece again when you reach the far corner.  This ensures your finger actually has somewhere to go, and all the messy thready bits that you sewed are now all hidden between the front and the middle pieces!  When you've gone all the way around, finish by threading through to the far edge and snipping off the thread.

Hours of fun for Who fans, big and small!  I have included some pictures below of the others I made, they are all based on that original 7cm x 4cm shape, with some shape adjustments to fit each character.

Here are Amy Pond (in her police uniform), a Dalek, the 11th Doctor (complete with Fez!) and a Cyberman... 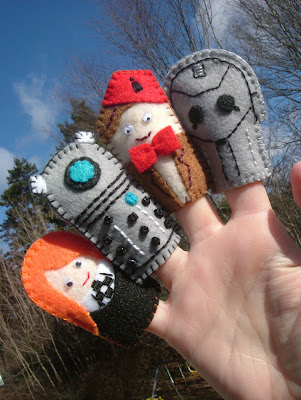 Vashta Nerada, the TARDIS, Rory Williams in his hospital scrubs, and an Ood... 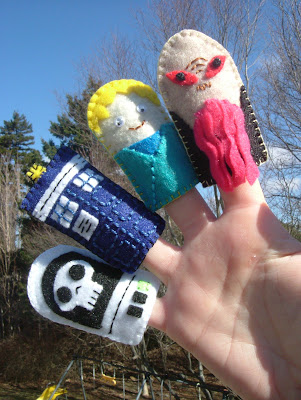 And finally, the 11th Doctor's Sonic Screwdriver, an Adipose, the Master and a Scarecrow! 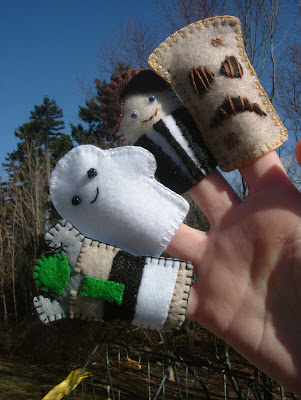 Keeping it Simple - Motivate Me Monday #92
The Girl Creative - Just Something I Whipped Up
Making The World Cuter Monday
Sumo's Sweet Stuff - Market Yourself Monday
Craftomaniac Monday Link Party
Skip To My Lou - Made by you Monday
Posted by Nickety Nackety Noo at 09:29

Nickety Nackety Noo
Nova Scotia, Canada
My name is Nikki and I live in Nova Scotia with my husband, our 4 kids and our dog - life is never dull in our house! I love to craft and make or upcycle things for my home to make it unique and fun. Thanks for stopping by! 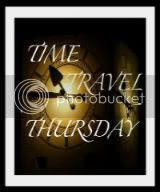 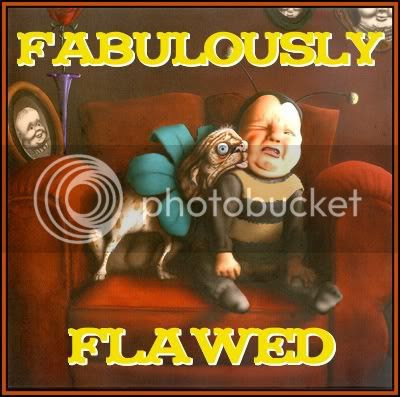